How The Parents Conflict Affects Children

Common sense tells you that the parents conflict affects children, but it is even worse when the parents feel hatred towards each. The following article discusses an all-to-common situation that many people face after a divorce.

What’s a kid to do when parents hate each other? 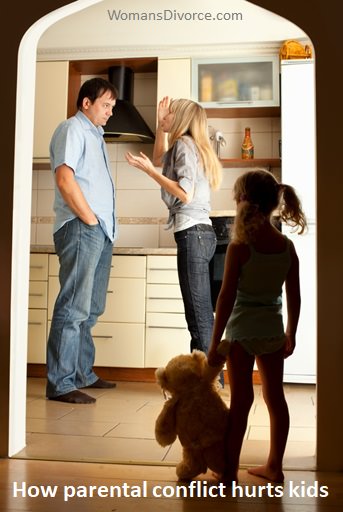 Sometimes the animosity between separated parents is so thick; you can cut it with a knife. In such cases both parents deflect blame on the other while denying or minimizing their own contribution to conflict.

In some instances the allegations of both parents are unfounded. The parents are like oil and fire and simply do not get along. They both may be hurt for the demise of the relationship. They may feel embarrassed for the breakdown and need to vilify the other. Each stakes out the position of being hard-done by the other thus gaining the sympathy of friends and family.

In other instances mutual allegations are founded. Both have in fact acted untoward. Both have acted poorly although not abusively. Yet, neither takes responsibility and both use the transgressions of the other to legitimize their own.

Caught In the Middle

Pity the children whose parents are so locked in mutual despise. The child becomes the battleground. Each parent begrudges the child’s relationship to the other. Even though a parent may hold their tongue, the attitude still exudes. The child lives with their disdain.

The child is between a rock and a hard place. To survive they learn to mask their feelings. To avoid the disapproval of their parents they align with each parent through negative comments about the other. So when with mom the child tells bad stories of dad to gain mother’s approval and minimize tensions with her. Then with dad the child tells bad stories of mom to gain his approval and minimize tensions with him.

Sadly though, the strategy only feeds the conflict between the parents as they feel more justified in their position with the new ammunition delivered by the child. Thus the parental conflict escalates and the child is subject to greater hostility.

How the Parents Conflict Affects Children

Eventually the child breaks down under the strain of conflict between despising parents. The child’s distress may take the form of school related problems, anxiety, depression, bullying, victimization and even physical complaints such as headaches and stomachaches. Because of the pre-existing parental animosity and then stories of the child, both parents blame each other for the child’s distress.

Both parents present self-righteously in their position and both parents are remarkably defensive towards any insinuation that their behavior may be contributory to the child’s distress. Both parents present with a profound sensitivity to feeling blamed. Discussing their dynamic with one parent can trigger a defensive barrage of the issues of the other parent.

In situations like these, favorable outcomes for the child are best achieved by working with both parents.

The service provider must be well experienced in working with such high conflict situations and the dynamics as described. The approach requires expertise with clinical assessment, mediation, education and reconciliation counseling.

Eventually, the parents must be brought along to understand that their antagonistic tug of war is the toxicity hurting their child. In some situations both parents feel they must let go of the rope at the same time. In other situations some parents take the position that the other parent must go first with regard to making amends or changes.

The challenge is to achieve a plan for both parents that will encourage a relaxation of the animosity and new collaborative behavior. Finally, the child needs to be brought into a session with both parents where they demonstrate their maturity by cooperating for the child’s sake and grant permission for the child to love both parents equally.

One never knows at the outset, if one or both parents can muster the maturity to take responsibility for their contribution to conflict. However, there is a secret to ending tugs of war… Only one side has to let go. The question is who is going to step up first.

What's a kid to do? Send both parents for help!

For more information on how parents conflict affects children during divorce and how to avoid it, these articles can help: