Head of Household Tax Filing Status after Divorce or Separation

Being able to claim the head of household tax status makes a lot of sense if you are separated or divorced and have a dependent child still living at home. With this filing status, the standard deduction is higher and your tax rate will generally be lower as compared to filing jointly with your husband or as a single person. And for low-income single parents this can also result in a higher tax refund.

Can I claim Head of Household?

To be able to file your taxes under the head of household status, you must meet these requirements: 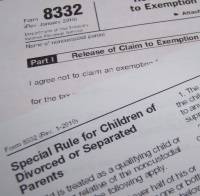 The IRS is pretty specific in their definition of who is the custodial parent. To be classified as the custodial parent, your child must live with you more nights during the tax year than your ex. If you have recently separated or divorced, this test applies to the period after your spouse moved out.

Only one parent is allowed to claim the head of household status if all qualifying children reside with the custodial parent.

In split custody situations, each parent has at least one child living with them the greater number of days out of the year. If each parent meets the requirements to file as head of household (as described above), both may do so if neither contributed to the support of the other household and separate finances were maintained.

I strongly suggest reading more about the Head of Household tax filing status in IRS Publication 501 before filing your taxes.

In addition to the head of household tax filing status, you also need to consider who claims the children as dependents. The following articles shed more light on some of the tax issues that come up during and after divorce: