In general, there are four different types of child tax credits that divorcing parents should understand before resolving which parent will claim the dependency exemption and/or how joint custody should be addressed in a divorce agreement. Since the time this article was originally published, the Tax Cuts and Job Act changed some aspects of the credits. Updated information will be bolded. 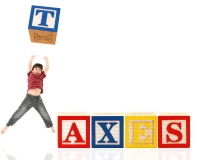 Taxpayers may be able to claim a tax credit of $2000 ($1,000 until 2017) for each qualifying child. In this case, a qualifying child is one that is claimed as a dependent, was age 16 or younger at the end of the year, and is a child that is the taxpayer's own (or that of their brother or sister and is cared by them as their own child). The child tax credit is phased out if adjusted gross income is above $200,000 (previously $75,000) for Head of Household and Single filers. Note this credit is refundable.

If a custodial parent pays for care for a qualifying dependent that was age 12 or younger when the care was provided or for other dependents that are not able to care for themselves, then they may be eligible for the child and dependent care credit. To qualify, one must satisfy all of the IRS tests summarized below:

This credit can be up to 35% of up to $3,000 of expenses associated with the care of one individual or up to 35% of $6,000 for two or more individuals. If the taxpayer's adjusted gross income is more than $15,000, they will receive less than the full credit (i.e. the "phase out" begins). However, for taxpayers with more than $43,000 of adjusted gross income, the credit is still 20% of qualifying expenses (i.e. up to $600 for one child, $1,200 for two or more). Note this credit is not refundable. For more information, see Understanding the Child and Dependent Care Tax Credit from the IRS.

There are other qualifying rules, for example, if you have more than $3,500 (2018) or $3,600 (2019), in investment income, then you cannot claim this tax credit. As was the situation with the Child and Dependent Care Credit, a worksheet is provided on the 1040 tax form to calculate the exact earned income credits.

There are two tax credits that presently apply to education - the American Opportunity Tax Credit ("AOTC") and the Lifetime Learning Credit ("LLC"). In any year, a parent claiming a dependent can only take one of the credits. You can find out more about these Education Credits from the IRS.

The TCJA did not change the American Opportunity Credit. The maximum AOTC is $2,500 per eligible student and is subject to phase out when modified adjusted gross income is over $80,000 (or $160,000 for jointly filed returns). 40% (up to $1000) of the credit is refundable. Note: the Protecting Americans Against Tax Hikes Act of 2015 made AOTC permanent.

The LLC is 20% of the first $10,000 paid for qualifying tuition and related expenses each year. The maximum credit is currently $2,000. Expenses for graduate and undergraduate work are eligible. There is no limit on the number of years that this credit can be claimed. The amount of the credit is phased out if modified adjusted gross income is between $57,000 and $67,000 ($114,000 and $134,000 if you file a joint return).

Return to top of Child Tax Credits after Divorce

Understanding child tax credits is just part of the equation when doing your taxes after divorce. What your filing status is and which parent gets to claim the children as dependents is also important. The following articles offer more information about the various tax concerns that people have during and after their divorce: