When you begin to date, the prospect of finding love after divorce slowly becomes a possibility. But after being burned by your ex, it's easy to feel like you don't know how to judge whether someone is suitable or not. The following article offers some good suggestions on how to proceed when you begin dating after divorce.

Some women find it difficult finding love after divorce. They may be jumping into the relationship too quickly. These strategies may save a lot of disappointment and hurt:

Determine if this should even get started

For whatever reason, men of limited virtue seem to have radar for vulnerable women. So the first question is, "Are you single". If not, don’t even bother to ask anything else, just run. Developing rapport with a married man or a man living with another woman is just asking for trouble.

Find out if he is still licking old wounds 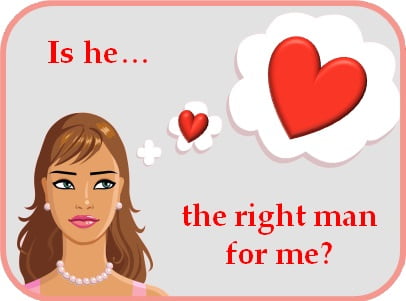 If the fellow is separated, find out how long the separation has been. If too short, he may still be carrying a torch for the other woman. Not long enough and he may not have looked at himself to figure out his own contribution to the demise. Somewhere in the middle and he may just be sexually hungry.

In any event, it can take six months to well over a year to get past a prior relationship and be ready for another. Be careful not to be his transitional relationship or just the answer to his pent up sexual frustration. These relationships tend not to last.

The more booze, the greater likelihood of problems. Ask him how much he drinks. You aren’t looking for his assessment of his drinking, but actual numbers. So, if he says he is a social drinker, ask him how often he socializes, with whom and how many alcoholic beverages per occasion.

More than six drinks a week or more than 4 per occasion and the risk of problems begin to escalate. It would be wise to take a pass. As for drugs, totally out of the question.

Check out his respect for you

Assuming the fellow is unattached, not licking old wounds, and not drinking more than a little, start slow and get to know him. Emotional attachment clouds rational judgment, so use your head before your heart.

As you get to know each other through dating, make your own preferences known. See if you share in decisions and if your input is accepted and valued. If decision-making is all one-sided, there is a big clue that you do not have a voice in the relationship.

Further, if values and goals are different or if there are behaviors at issue, discuss them. If they cannot be resolved now, sex, marriage, cohabiting or having children will not make them any better. You might be better off leaving now and starting the process again.

If the fellow refuses to wear a condom or one is not available, then no intercourse. If he objects, he is telling you that your health is secondary to his sexual gratification. This is not the basis of a caring relationship and signals an exit point.

Continue to get to know each other

If you have gotten this far and now think this relationship has substance, continue to court for at least a year before cohabiting or marriage. People are often on their best behavior in the beginning of relationships. A period of courtship allows the couple to get comfortable with each other such that their true self emerges. See if you like him then. If so, then consider formalizing your relationship.

Just like it takes time and effort to churn milk into butter, it takes time to determine the goodness of fit in relationships. Slow the process down and take the above strategies as steps along the way. The goal is a stable, healthy and sustainable relationship to truly meet your needs rather than a quick jump into the pool, holding your nose, hoping the water isn’t polluted. Finding Mr. Right requires choices.

Return to the top of Finding Love After Divorce

For more advice and information on finding love after divorce, check out the following articles:

The Divorce and Dating Playbook