Many women feel like a failure after going through a divorce, and I can understand that feeling. But, you need to ask yourself if how you view yourself is really an accurate image. Just because your marriage didn't work out doesn't mean that you are damaged goods. You still have a lot to offer this world, and the right people in your life will recognize that fact. The article below discusses how negative emotions can get out of hand and wreck your self-esteem, as well as how to put a different perspective on how you view yourself after divorce.

Quit Thinking You Are a Failure

It is perfectly normal during and after divorce to reflect on some of the problems you had in your previous relationship with your former partner. This can help you think about some times and some things that you did wrong. You will then recognize that you should have done this or that instead. And then such thoughts will lead you to realize that you did have some short-comings as a partner. It is natural and normal for everyone to think through such possible failures when a relationship ends. And it is OK to think that way a few times, or perhaps a dozen times or so during or after your divorce and separation.

But dwelling on your short-comings is not productive. Repetitive thinking that you are a failure, over and over again, is not good for you and will only lessen your self-esteem.

So, the first point here is to NOT dwell on your being a failure. Quit Thinking You Are a Failure!

These thoughts of failure are extremely negative and dwelling on them for a long time can have significant physical and emotional ramifications. If not checked quickly, these feelings can lead to anxiety problems and even depression. 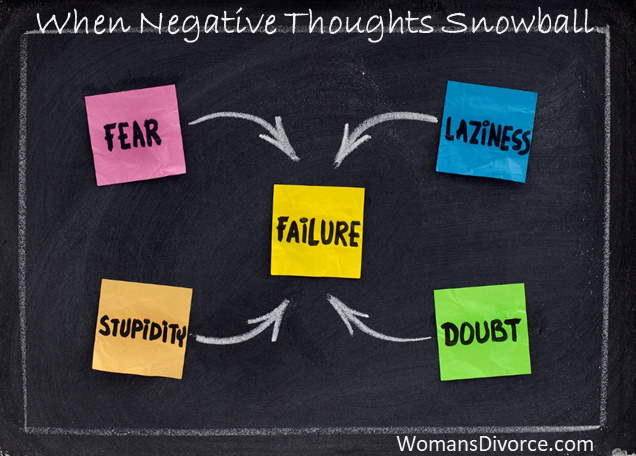 When you begin thinking badly about your short-comings, and start blaming yourself, many other things that you may have done wrong will also spring into your mind. Together, these may create an uncomfortable cycle whereby you are thinking continually about all your failures as a partner, over and over again. When this happens, more unpleasant thoughts, like all the things your former partner says you have done wrong, will also pile up on top of your own personal faults and blaming.

This repetitive negative thinking about all of the problems you caused and every little thing you may have done wrong can build quickly to be a heavy weight for you to carry! Don't carry that weight! It can be physically harmful for you to "own" this weight and carry it with you all the time.

It will be much better for you to choose instead to start tossing it out of your life and begin moving past it. Learn from your failures and then try to prevent those same problems from cropping up in your next relationship.

Remember the Serenity Prayer. You can't change what is past. But you CAN CHANGE what you'll do in the future with your next partner. Perhaps you can do more of whatever is needed by your partner to keep the "give and take" part of your relationship working well. Try to listen more, compromise more, simply forgive and forget, allow your partner to try something new, and so forth.

The second point here is for you to realize...

There are Two Sides to Every Story of Divorce and Separation.

It takes two people to make a relationship. So don't think you alone are at fault!

When you think about it long enough, there are probably two defensible sides of every divorce story. And the point here really is to understand that no one person involved in divorce or breaking up is all to blame, nor is the other, completely innocent. There's no need for anyone to think they alone were the failure, as if they alone were the only one at fault. There are two people in each divorce and separation that are both at fault, at least partially.

There are many more common reasons for divorce and separation between partners. A lot of them stem from simple differences in opinion about many different issues between partners. There can be problems with communication, like how, when and how often you communicate with each other, and problems with who compromises and who doesn't. It is very typical too for partners to have different wants and different needs. Parenting differences about who wants more children and how to discipline and reward children may also be common issues. This same set of differences about how to treat grandchildren can be a problem too later on in life.

Agreed, divorces due to extramarital affairs seem pretty strong cases for only one side being to blame. But possibly in some of these cases too, there may have been problems caused by the "hurt" one, perhaps earlier on in their relationship, sometime before the other one had the affair. The hurt one may have been holding back affection due to some disagreements with their partner, or was holding back on other things as punishment for some offense by the other. (Please understand that I am not trying to defend any "cheaters" here, but simply trying to suggest two possible sides even in these divorce situations too.)

Obviously there are exceptions to both partners being at fault. Physical abuse of a spouse and/or children, illegal drug use, and other serious problems including criminal charges are exceptionally different cases.

© Brian Daniel. Excerpt from his book (#ad) "Yes, There Is an Upside of Divorce!" May not be copied or distributed without the written consent of the author.

As an Amazon Associate we earn from qualifying purchases

Learning how to stop the negative thoughts is just part of the divorce recovery process. To help you understand the different aspects of the recovery process, the articles below offer more insight on facing the uncertainty, dealing with lingering depression over the end of your marriage, and tips to help you move on: