The Emotional Stages Of Divorce

Ending your marriage is not just a legal technicality; there are also the emotional stages of divorce to work through. While not everyone experiences them to the same degree, there are predictable emotions that need to be recognized and worked through, as outlined in the following article.

The Emotional Roller Coaster of Divorce 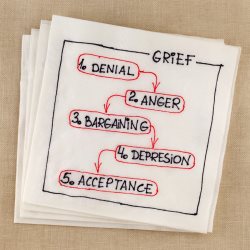 Divorce is an emotional task unlike any other in modern society, and different people experience it in different ways. While some individuals go through nearly all of the extreme emotional states that we describe here, others have an easier time getting through this period and will maneuver these choppy waters with more skill. The important thing to remember is that all the emotions we discuss are normal, but while some are readily acknowledged by the people experiencing them, others are so uncomfortable that it's difficult even to admit they exist.

The wide array of emotional states that many people experience during the early stages of the divorce process can diminish their capacity to think clearly, impair their judgment, and make rational decision making difficult or impossible.

Being sad when a marriage ends is natural. Although it's painful, grief is a healthy emotional response to the loss of an important relationship. We are hardwired to feel it, and it wouldn't be reasonable to expect otherwise. While sorrow and grief can be very hard to handle, most people do understand and accept the inevitability of these feelings.

We know from research, theoretical writings, and personal experience with thousands of people going through divorces that though the emotional impact of a divorce is as severe as that of a death in the immediate family, the grief and recovery process does have a beginning, middle, and end. Though they may seem endless, the pain and confusion surrounding separation and divorce do gradually lighten and finally go away -- for most people over a period of eighteen months to three or four years following the marital separation, though recovery can be quicker or slower.

Elisabeth Kübler-Ross, a pioneer in the hospice movement, first described the stages of grieving about and recovering from a major trauma such as death or divorce:

Understanding these stages can be very helpful when it comes to talking about divorce and decision making. It's important to know that when you are in the early stages of this grief and recovery process, it can be challenging to think clearly or to make decisions at all, much less to make them well. Identifying your present stage of grief and being aware of it is an important step toward ensuring that you will make the best choices you can.

Get the emotional support you need to deal with the challenges of divorce. BetterHelp will match you with an online counselor to help you work through your issues. (*Please note our website receives compensation for referrals to BetterHelp.)

Experiencing guilt and shame is also a normal reaction to the end of a marriage. These feelings arise when we feel a sense of failure -- of not having fulfilled our own or our community's expectations. In the case of divorce, people often feel guilt and/or shame because they have failed to stay married for life. That's partly a matter of personal expectations -- not fulfilling the promises made to a spouse -- and also partly a matter of not fulfilling what our culture seems to expect from us.

If our culture's expectations about marriage and divorce are reasonable -- if they fit well with how people actually behave in that culture -- and we don't measure up, the guilt and shame felt at the time of divorce may be appropriate. If the culture's expectations don't match well with the reality of marriage and divorce as people actually live it, the guilt and shame can be much more problematic -- difficult to see clearly, difficult to acknowledge, difficult to manage in a divorce. In addition, there are some marriages in which one or both partners have engaged in extremes of betrayal, deceit, or even criminal behavior that almost always involve feelings of guilt and shame.

Regardless of whether the feelings arise from not having met one's own or the culture's ideals or from actual wrongdoing, we know that for many individuals, guilt and shame can be so painful that they change very quickly into other, more tolerable feelings, such as anger or depression -- often without the person's even knowing that the guilt and shame are there. This is why it is so common in divorce for each partner to blame the other and why it can be so difficult for divorcing partners to accept responsibility for their own part in a failed marriage.

We've encountered few divorcing people who find it easy to see or accept their own feelings of guilt and shame. These powerfully negative feelings often remain under the radar, hidden and invisible, where they do the most harm. Strong feelings of guilt or shame can make it difficult or impossible to take in more balanced information, to maintain your perspective, and to consider realistically your best alternatives for how to resolve problems.

Guilt can cause spouses to feel they have no right to ask for what they need in a divorce, causing them to negotiate unbalanced, unrealistic settlements they later regret. Family lawyers have a saying that "guilt has a short half-life," and because guilt is such an uncomfortable feeling, it can easily transform into anger. We often see people who have negotiated guilt-driven agreements having second thoughts and going back to court to try to set aside imprudent settlements.

Similarly, shame often transforms into blame, anger, or rage directed at the spouse. Bitter fights over children or property can be propelled by feelings like these, because modern divorces seldom brand either partner as Snow White or Hitler, Prince Charming or the Wicked Witch, and therefore the anger, which needs to go somewhere, goes into fights over matters that courts are permitted to make orders about.

Fear and anxiety are common because of our hardwired "fight-or-flight" instinct. Our bodies react to stresses (such as an angry phone call from a spouse) by using physical alarm mechanisms that haven't changed since our ancestors had to react instantly to avoid being eaten by saber-toothed tigers. You react to stress physiologically in the following ways:

When people are under chronic and severe stress, they may have anxiety attacks, in which they tremble and their heart pounds. Or they may be paralyzed by almost overwhelming feelings of fear that seem to come out of nowhere. We work with many people who experience these feelings as their marriages end. People who feel overwhelmed or confused in this way tend to fall back upon old habits of thought and action rather than looking intelligently at the facts of their situation and weighing the best choices for the future.

As marriages become troubled, couples often rely on old habits of dealing with differences that lead to fights rather than solutions. If those old habits didn't lead to constructive solutions during the marriage, they will surely yield no better results during the divorce. In addition, people feeling anxious and fearful may resist pressure to move forward and resolve divorce-related issues because of feeling unready, while their spouses may be impatient, seeing no reason why the divorce wasn't over months ago. Bitter fights in the divorce courts often stem from differences such as these.

Unfortunately, both our court system and our culture at large encourage us to take action in divorces based on how we feel when we are at the bottom of the emotional roller coaster, when we are most gripped by anxiety, fear, grief, guilt, and shame. After all, that's when most people are moved to make the first call to a divorce lawyer. As a result, people are encouraged to make shortsighted choices based on emotional reactions that do not take into account anyone's long-term best interests. The resulting "bad divorces" harm everyone and serve no one well. They are very costly; they fail to plan intelligently for the future; and they inflict psychological scars on both the adults and the children.

Experiencing the emotional stages of divorce is comparable to riding a roller coaster, but you can get through it. The articles below will help support you in your journey: