Recently separated? Practice As if Parenting

Some parents feel bad about their separation in view of the kids and are reluctant to follow through with expectations or alternately; they try to buy their children’s affection with toys or favors. 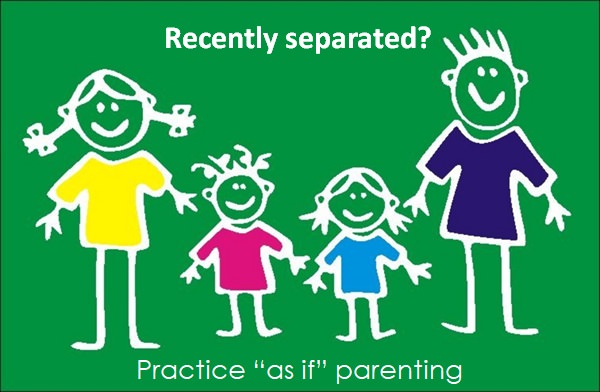 These parents may think they are compensating for the child’s distress over the separation, but they are really trying to assuage their own guilt. While the kids may enjoy the shower of gifts and special liberties, this only gives rise to self-righteousness – a sense of entitlement where they think they can have whatever they want and rules don’t apply. Even though parental separation may be distressful, it can be overcome. A developing sense of self-righteousness can lead to selfish, self-centered, out of control children and can last a lifetime.

Parents are well advised to continue parenting on the "as if" principle. That is to say, they parent as if they were still together – not separated. The same rules, routines, limits and expectations apply; there are no special favors and no purchasing of extra toys and games. If the children are distressed, parents should talk with them and normalize their upset, not let them get away with inappropriate behavior or compensate with inappropriate favors or gifts.

Even if one or other parent appears to not heed this advice, this is no reason for both parents to let go of appropriate parenting. Kids need at least one responsible parent who will teach right from wrong, set limits and routines and won’t spoil the child with a shower of gifts. (Read more about balancing parenting styles)

When kids play parents off each other

If parents are concerned that their child will complain or use the difference to manipulate them to grant favors as the other, these parents must still stand their ground. The solution is not to run down the other parent for spoiling the child, but rather to concentrate on being appropriate parents themselves.

Children, even in intact families try to pit one parent against the other. So whether intact or separated, rules, routines, limits and expectations must prevail. Over time the children learn there are different rules with each parent. As long as you remain firm, they learn that you cannot be swayed and they behave accordingly. Over time, they also learn to respect the parent that offers rules, routines, limits and expectations as this provides for a more stable and predictable environment that encourages healthy development.

If a child objects, you can ignore the objection and continue to parent as if. Children’s protesting doesn’t make their demands right. If you wouldn’t do something when you were in an intact family, then shouldn’t do it just because you are separated. Parents must come to terms with the fact that they only have control of themselves and their domicile. They do not have control of the other parent or their domicile. As if parenting begins in one’s own home.

Lastly, kids will naturally test limits and boundaries. This is true of intact families and those where the parents are separated. So, not all behavior is tied to the separation. If the parents can communicate and cooperate, then set mutually acceptable rules, routines, limits and expectations. If the parents cannot agree, then you must treat behavior as an issue for your house only.

Over time kids do learn the different rules the parents have and adjust. There is no need to discuss the difference between one house and the other. This keeps attention mired in the separation and conflict. Rather, attention should be directed to your time with your children and enjoyed and managed accordingly.

Parent "as if"; it will take the pressure off you and teach your children that we remain bound by rules routines and expectations. If your child is having a difficult time adjusting, consider talking with them and expressing feelings though discussion. In so doing, you can have children who learn to verbally express their feelings and whose behavior remains acceptable.

Keep reading for more information about cooperative parenting during divorce:

Using the Same Rules at Both Houses