Can words hurt as much as the bruises of physical abuse? For anyone who has been subjected to a never-ending stream of put-downs and derogatory comments, the effect of these words is just as bad as being hit. 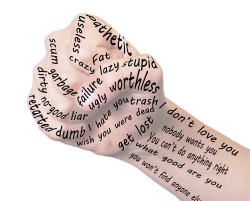 You see, verbal abuse has a way of wearing down a woman's self-esteem until she gets to the point of believing she is ugly, worthless, and nobody else would put up with her. Even if the person inflicting these verbal wounds claims that he didn't really mean it, the damage accumulates over time.

People may tell you that you're just too sensitive, or that they really didn't mean to hurt your feelings. Let's take a minute to think about how true that really is. Even a child knows that using words with a certain inflection or tone of voice can have an effect on other people. Especially if you repeat it over and over again, as any mother can attest who has given in to a whiney child just to get them to be quite.

You may be thinking there is no similarity between a child's demands and how your spouse speaks to you. But let's peek into the world of verbal abuse and the damage that words can inflict over time. Imagine the fictional woman below, going from a new bride confident in herself and her marriage, to a timid woman walking on eggshells who is slowly becoming a mere shadow of the strong, vibrant woman she once was. Let's call her Missy.

Setting: The dinner table, after Missy spent all day preparing a special meal for out of town guests. She has even fixed some of her favorite foods from childhood. She notices her husband's raised eyebrow as he says...

"Is this what we're having for supper? You know I hate it" as he pushes his plate away and gets up from the table.

Setting: Missy is getting ready for a birthday party by wearing a new outfit to celebrate losing most of her baby weight. Her husband walks in and asks with a doubtful tone...

"Do you think you should wear that? You need to lose some weight."

Setting: In bed after a long week at work and having to take care of a sick child who keeps Missy up for hours every night. Her husband wants to get romantic and all she wants to do is sleep. After Missy gently asks if he'll take a rain-check, he rolls over and huffs ...

Setting: In the back yard where Missy's children are playing on the swing set. She turns for a second to see what her daughter is yelling about and her toddler trips and hits his head on the swing. Angrily, her husband yells ...

"What kind of mother are you? You weren't even watching the kids and look what happened. I'm going fishing so I can get some peace and quiet on my day off."

Setting: Late at night, sitting in the living room with a bat because someone tried to get in the front door. When Missy angrily confronts her husband for being out so late and having his cell phone turned off, he retorts ...

"I was just out with friends and you're not my mother. You don't tell me when I have to come home."

Setting: Trudging home after a double-shift because they are short-handed at work. As Missy's husband gets out of the car from having beers with his buddies, he asks ...

"Why isn't supper on the table yet? I'm hungry and you shouldn't make the kids wait so long to eat."

The slow erosion over time

These are just a few examples of how words hurt and harm a woman's self-esteem. Now imagine, similar scenes being played out over months and eventually years. The woman tries everything to mold herself into what she believes her husband really wants, but it never makes a difference. Eventually, she becomes a shell of what she once was, believing that she'll never be good enough, smart enough, or pretty enough to please her husband.

You may be asking why anyone would put up with such behavior. Not every woman will! At the first sign of put-downs or degrading remarks, some women will cut their losses and leave. But other women will stay, determined to make it work out no matter how much the words hurt, thinking their husband will be happy and life will be good if they can just change enough.

Unfortunately, nothing they say or do will change the relationship, because ultimately it's an issue of control. And over time, the victim becomes a shell of who she once was as her sense of self-worth all but disappears.

What is so sad is that these women often don't see themselves as victims of abuse, and few will leave the relationship unless things turn physical. Unfortunately, verbal abuse often does escalate to physical abuse as the abuser seeks even more control.

Return to top of When Words Hurt

Abuse is the weapon of the vulgar.
- by Samuel Griswold Goodrich

As you can see, words hurt and can be just as damaging to a woman's spirit as physical abuse. If you're currently dealing with verbal abuse in your relationship, you might benefit from from speaking with a counselor about your situation. It can help you uncover and understand the damage that's being done to you. BetterHelp offers a discreet online option where you can discuss and work through the things you are experiencing. (*Please note our website receives compensation for referrals to BetterHelp.)

Below, you can find other articles that deal with other aspects of abusive relationships: