Why Affairs Cause Heartache

If you've been tempted to stray, you may not be concerned with why affairs cause heartache. After all, it feels so good to have someone lavishing attention on you and making you feel like you're someone special. This can be very tempting, especially when your significant other doesn't even seem to give you the time of day. 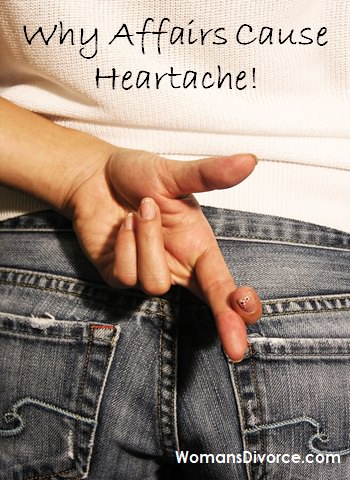 But before you step over the line, you need to consider some reasons on why you shouldn't have an affair. First of all, if you are thinking about getting a divorce, or if your affair leads to divorce, you have put yourself in a bad position. The discovery of an affair tends to make spouses combative during divorce proceedings, and can also impact a judge's decision on custody and property settlement.

Another important consideration is the impact that an affair can have on your integrity and self-esteem. The article below makes some really good points on why affairs cause heartache, especially from a woman's point of view.

Affairs Are About Anything But Love

Participants present affairs as arising by chance and based upon love and mutual adoration. The relationship advances from flirtation to infatuation. This can happen quickly or over considerable time. Eventually there is an expectation that the affair advance to sexual behavior. The participants then claim each other as true love partners who understand each other better than their own spouses. It sounds so romantic and so beyond their control. The relationship continues in secrecy.

Scratch the surface and what may transpire is one emotionally vulnerable adult and another adult seeking sexual gratification. More often than not, it will be the woman who is emotionally vulnerable and the man who is seeking the sexual gratification. Upon this scenario, the man professes his love and the woman in part feels completed by his attention and in part badly about herself for the context of the relationship.

What is most important for women to realize is that this is not a healthy loving relationship. More to the point, these relationships can be insidiously emotionally and psychologically abusive of women.

Affairs are secretive by nature and represent a betrayal of fidelity. Hence they contribute to marital turmoil and demise. Because of these factors, affairs also diminish personal integrity. It is hard to feel good about oneself entirely in this situation. If one does feel good about oneself, it may be through a psychological process of disassociation or splitting. Through these psychological processes a person cuts him or herself off from those parts of oneself that are distressful. Hence the person is not fully integrated in terms of feelings, thoughts and actions. It is a way to cope with loss of integrity.

Decent men do not subject the object of their affection to such harm. Decent men would not place a woman in conflict with her marital partner, family, children, friends and community… or with herself.

Men who engage in such activity tend to be working towards their own sexual gratification over the needs of the woman. The approach then, often involves a process of grooming towards the sexual encounter. The man pursues, the woman resists, the man continues and escalates displays of affection and adoration, and the woman succumbs. The period of grooming will depend on the vulnerability of the woman and the intensity of the pursuit. Guilt and shame are the most common of feelings when the intoxication of the moment subsides and the woman is left to ponder the experience.

If a fellow truly admires a married woman, in the first place he wouldn’t compromise her marriage, family or integrity, but in the event feelings deepened and were mutual, he would resist the relationship so that the woman could choose how to deal with her marriage first – without the complications imposed by an affair. In the event the fellow is also married, his transgressions are threefold; one against his spouse, the other against the married woman as described above and the third to himself. He has also participated in self-demeaning behavior.

Affairs are about anything but love. Romance has nothing to do with it. Harm to the participants and bystanders is an inevitable conclusion. Hardly the example anyone would want for their children.

No wonder affairs only happen in secret.

If you are thinking about stepping outside your marriage to find the love and attention you need, then you need to consider not only why affairs cause heartache, but also what the eventual outcome might be. The following articles offer more information about affairs and their cause.

Quote of the Day
Affairs never solve the problems that lead to them.
- Emily Brown