Your Emotions After Divorce

You can expect to experience a wide range of emotions after divorce.  One day you may feel excited about your new-found freedom, while the next day may find you moping around the house mourning the loss of the life you used to have.  These are normal reactions and all part of working through the emotional divorce from your ex. 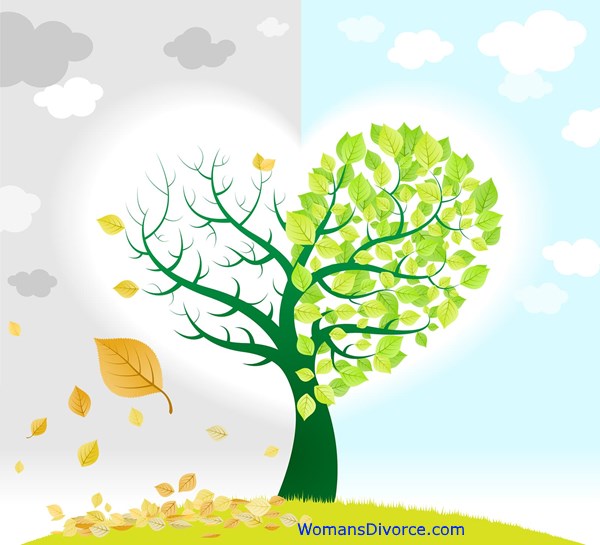 Working through these feeling is important, because not dealing with your emotions after divorce can hold you bound to your ex and prevent you from moving on.

The following article discusses the wide range of emotions that people experience after divorce, as well as highlighting what can happen when a couple is unable to emotionally separate from each other.

Separation and divorce is an emotional process, not just physical and legal event. There is still an emotional bond between spouses, even if it is acrimonious. Feelings generally are still ambivalent. Many couples attempt to reconcile from one to three times, and sixteen percent continue to have sex. More than two-thirds say they would call their ex-spouse first in a crisis.

This creates a constant state of disequilibrium; particularly where children are involved. If one parent is coming and going, the family cannot reorganize to establish new roles and boundaries in regard to money, living space, household responsibilities, dating, and parenting.

Throughout the first year, both parents continue to feel anxious, angry, depressed, rejected, and incompetent. Women feel more helpless and vulnerable, and have low self-esteem, while men tend to work harder, sleep less, and function ineffectively. These feelings are more intense in older spouses and longer marriages. Both spouses have almost twice as many car accidents and three times as many traffic citations as before the separation.

Divorce is tough! If you're struggling with all the changes, get the emotional support you need from the online counselors at BetterHelp. (*Please note our website receives compensation for referrals to BetterHelp).

Domestic disorganization continues sometimes longer than a year until boundaries and new rules are established. The parents must redefine a new, non-intimate, co-parent relationship and independent relationships with the children.

Parents often reverse roles. One who was over-functioning becomes irresponsible; the under-functioning spouse tries to be the perfect mom or dad. The custodial parent may take on dual parenting roles, and the children, particularly boys, challenge the new regime, especially their single mothers. Children may fill-in adult responsibilities. The non-custodial parent must adjust to the lost time with the children, as well as loss of control.

In more dysfunctional families, the system may close out one parent entirely. This appears to be a good solution to constant conflict, but it actually causes the parents and children greater stress and depression, and may have severe impact on the children's long-term development and mental health. Alienation from one parent can be very damaging.

Adjusting to the Changes

Although stress reaches a peak at eighteen months, particularly for women, who may still experience daily mood swings, by the end of the second year, the legal and economic issues are usually settled.

Adjustment will be greatest where the family has been able to establish a bi-nuclear, co-parenting arrangement. This will depend on the parent's emotional reactivity to each other and ability to maintain a child-centered relationship. By now, both spouses begin to seek sexual relationships, which is particularly difficult for the single parent of young children. When a parent remarries, it is helpful to the children if the stepparent is integrated into the parental system with the ex-spouse.

The Trap of Remaining Emotionally Bonded

Sometimes, a couple's emotional connections will undermine the attempts to separate. These couples are highly reactive and co-dependent. Rather than go through the pain of separation, couples persist in having ambivalent feelings and repeatedly try to reconcile over many years. Such couples are deeply emotionally and sexually bonded and maintain idealized images of one another.

One couple, divorced many years, lived in separate houses on the same property, but the reality of each other fueled their continued legal hostilities and helped to keep them apart. Some couples maintain the bond by depending upon their ex-spouse for physical or emotional support. One pair lived as neighbors, but could not separate too far, because she needed to rescue him from his depressions, and he needed to drive her around.

Sometimes these spouses complain that their mates are verbally abusive, but they nevertheless maintain contact by subtle encouragement or by not setting limits. One woman clung to the hope of reconciliation, despite the fact that her ex-husband repeatedly told her how happy he was with his new mate; and despite her anger, he confided in his ex-wife regularly, drove her to appointments and helped her with chores.

Part of working through the emotional divorce is accepting and mourning the losses that accompany divorce. Divorce entails loneliness, change of lifestyle, imagined losses of what might have been, and of memories of what once was, as well as real losses on every front, such as a home, family, children, financial, and often friends and in-laws. Divorce can shatter ones self-esteem and identity - as a wife, a husband, and possibly as a father or mother.

Generally by the third year most spouses have formed new lasting relationships, and emotional functioning has returned to the pre-divorce level. The non-custodial parent has become more comfortable with the children, is more assertive, showing consistent discipline and affection, or has become more distant. Unless the parents are still at war, the children return to the normal process of growing up.

Return to the top of Emotions after Divorce

Darlene Lancer, Copyright 2009 - Darlene Lancer is a Marriage & Family Therapist, author and popular speaker, and formerly was an attorney and Senior Mediator in Los Angeles Conciliation Court. She maintains a private psychotherapy practice in Santa Monica where she has worked with individuals and couples for over twenty years. For more information, see Darlenelancer.com

As you can see, working through the emotions of divorce is so important in rebuilding your life after divorce.  To help you along, the following articles offer some great tips on what to expect and how to handle your feelings after divorce.