Resolving a custody fight in a family law court is a damaging and destructive way to resolve parental disputes. It prolongs the battle and decreases the odds of cooperative parenting after the divorce. The following article gives more insight on what actually goes on in the courtroom, and why it's not the best place to resolve the custody issue.

WHY FAMILY COURT SHOULD BE THE LAST RESORT 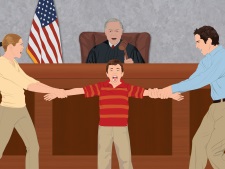 Most separated couples have major disagreements about financial matters or the custody of their children, and still the great majority does not go to court. While less than 10 per cent of separated couples go to family court to resolve their problems, this figure still represents a very large number of people. That is why family courts everywhere are so busy and some are experiencing unprecedented and ever increasing backlogs.

While there will always be some couples whose circumstances necessitate court action, most couples who bring their disputes to family court do not need to and do not enjoy, or ultimately benefit from, the experience. I would go further and suggest that in many cases, the parties' ability to communicate and co-operate with each other as co-parents became worse, not better, as a result of family court litigation.

What's wrong with going to court?

Why is litigation such a damaging and destructive way to resolve parental disputes? The answer is simple: the court system is based on an adversarial process in which "winning" is the object of the exercise. The fact remains that family litigation is still litigation, and any lawyer or judge will tell you that a lawsuit is a most unpleasant and highly competitive way to resolve a dispute.

If the parties to a lawsuit have to keep dealing with each other for many more years, as is the case with parents, the effects of litigation on their ability to do so amicably can be tragic and long lasting. Believe me when I tell you that litigation is not a friendly exercise.

In order to understand why litigation is undesirable, it is necessary to know how family court works. In a court case, each party presents the evidence he/she has to support the conclusion he/she wants the judge to reach. This evidence usually takes the form of sworn affidavits, business records, and expert reports (such as medical reports or property valuations.) If a trial were being held, the judge would also hear the testimony of the parties and their witnesses.

Court cases are supposed to be truth-finding exercises, but litigants quickly learn that cases are not decided on the basis of what actually happened - a judge cannot know for certain what actually happened because he/she was not there to see it. The best we can do is to make decisions on the basis of what can be proved. Without objective and impartial evidence from reliable sources, the judge may not be satisfied on a balance of probabilities that the fact you are alleging is true - or, to be more accurate, probably true - even if you know it is true.

One factor that parents rarely consider in custody and access cases is that the judge is not restricted to accepting either parent's plan. Frequently, the judge disagrees with both parents and constructs a parenting arrangement that is a compromise between the plans, or something completely original.

Each case must be looked at on its own merits, but obviously the task of credibility assessment and fact-finding is not an exact science, and judges are only human. We do our best with the evidence we're given, but we have no illusions about the frailties of the court process when it comes to determining the facts, assessing parenting skills, and making the best possible decisions for children.

Reasons to consider an alternative form of dispute resolution:

2) Courts are often backlogged, and there can be delays in getting your case before a judge.

3) The judge will be making crucial decisions about your children by way of motion, without ever hearing you testify, unless you are one of the very few who litigate all the way to trial.

4) The judge will probably never hear directly from your children.

5) If you are like most litigants I see, it is likely that a lot of the evidence you would want to put before the court will be rejected because it is inadmissible or irrelevant.

6) It is also probable that the evidence offered by your relatives and friends will not be considered impartial or objective and may not be accorded the weight you feel it deserves.

7) Because the judge has the exclusive authority to decide what is in your child's best interests, and because he/she is not bound by the parents' proposals, you run a very real risk that neither parent's plan will be accepted and that the judge will devise his/her own parenting plan, which may appeal to you less than the plan that was proposed by your ex-partner.

9) There is always the possibility of an appeal, which imposes more delays, costs, and uncertainties.

10) Even after a custody and access order has been made, a fresh court case can be started to change that order if a material change in circumstances has occurred.

If it looks like there is the potential for a custody fight with your spouse, try to work it out without going to court. If that's not possible, then the following articles offer information on how to prepare for a custody battle: