How Divorce Helped Me Heal From My Codependency

So often high conflict divorces and codependent behavior go hand in hand.  My personal journey through codependency began during the early stages of my divorce and has been a gift for me, my kids, and my friends and family. When I was able to see my role in my unhealthy marriage, I changed the one thing I had control over, me.  By changing my codependent behavior, everything else followed suit. 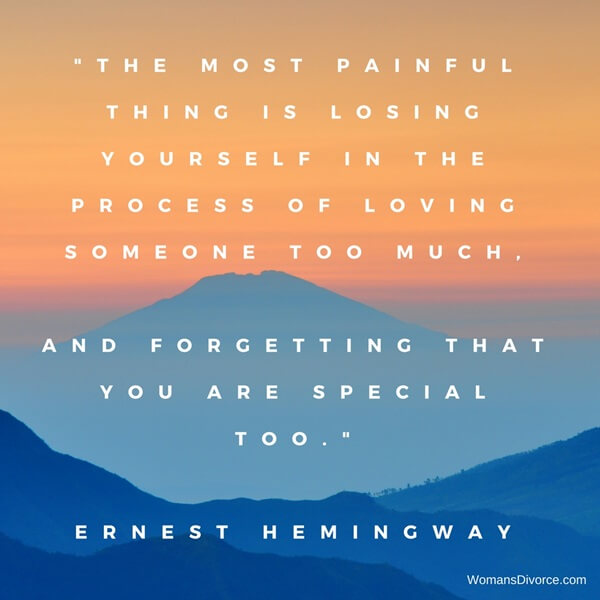 Codependency is different from being a caregiver or caretaker.  Codependency is a type of dysfunctional, servient relationship where you support or enable another person at the expense of taking care of your own needs. While codependency is by no means a uniquely female struggle, women are often raised to be caregivers and can slip into the dysfunction of codependency.

In relationships where your husband struggles with drug addiction, alcoholism, gambling or personality disorders, the prevalence of codependency increases significantly.

If you are codependent, your behavior often predates your marriage and is usually rooted in your childhood experience with your family. You may have grown up in an alcoholic household, had a parent with a mental illness or personality disorder or one who passed away early on in life, thereby creating a void you were relied on to fill.  Your childhood innocence was stolen and your behavior was learned during these early years.  While your codependency may predate your marriage, it is at least one aspect of your unhealthy interactions with your husband.

A codependent puts his needs before her own, to both people’s detriment.  Codependents are controlling (we try to control the emotional rollercoaster that we live with). We gain satisfaction around feeling needed and relied on. We enable our partner’s behavior by absorbing his consequences by denying and excusing his actions or buffering the relationships his behavior is harming.  A codependent typically was not raised with boundaries, therefore he doesn’t understand what they are, how to set them or what it takes to uphold them.  We might rage when we are disrespected, but don’t know how to back up our words with healthy boundaries.

It is exhausting to be codependent.  It is both a fruitless and thankless effort.  He will rarely if ever see, acknowledge or appreciate your efforts. I had spent my life grabbing at the wind (my partner) to change the direction of our relationship, unaware that I was the sail and I had the power to right my own course.

I grew up with an alcoholic dad and rage-a-holic mom. I was the middle child, the peacemaker. I learned to do what my parents needed me to do to gain their love.  It was different with each parent.  I carried this subconscious way of ‘being’ into all my romantic relationships. I had no idea that I was part of the problem. When my marriage was falling apart, I joined Al-Anon and began to focus on my behavior, what I could control, and what I could do to change the dance I was having with my soon-to-be-ex husband (STBX).  I was shocked when I realized how unhealthy and controlling my behavior was.

If you relate to the behavior I have described, you too are fully capable of changing your circumstances. It is vital that you embark on this journey with gentle kindness and compassion toward yourself.  We don’t know what we don’t know, the unknown unknown...until we do, the known unknown. When we learn of the known unknown it is our duty of self to explore it until it is simply known. It is our responsibility to ourselves, to our family, to find a better way and adjust to it.

A few powerful action steps that will set you on a healthy course to independence in all your relationships include:

I was a shell of myself until I chose to take back my life and shed my codependent behavior.  My divorce was the catalyst that healed me, strengthened me and enabled me to live an immensely more pleasing post-divorce life.

If you would like more information and support on ending your codependency, please visit our Divorce Support Group. Journey Beyond Divorce was founded in 2010 by IPEC & ICF certified divorce coach Karen McMahon after she witnessed firsthand how ineffectual and limited traditional divorce support was during her own divorce. Emerge from divorce a renewed and empowered woman!

Learn how to save time, money, and turmoil.