What To Do When He Reacts Badly 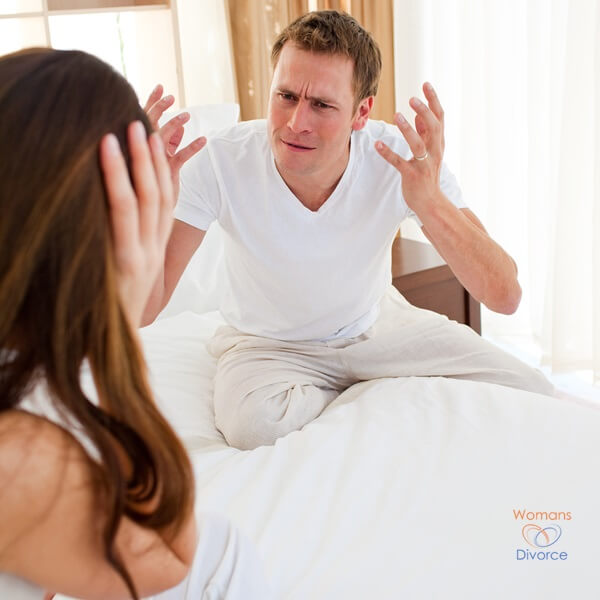 Unfortunately, how men handle divorce is not always reasonable or nice. If the subject of divorce hasn't come up before, your announcement that you're leaving may take him totally by surprise (even if your marriage has been miserable for years). Upon hearing the news, some men react with stony silence, others leave the house to think, many ask why, and still others will get nasty and vindictive.

The first three reactions are fairly common and easy to handle, but the angry spouse is a different story, especially if he is a narcissist. If you think that your husband will have the tendency to fly off the handle when you tell him that you want a divorce, read the following article from Michael James on how to best proceed:

The stress of getting divorced lowers people's resistance and ability to contain themselves. It's for that reason you see the "flip-flop" in moods and demeanor. Remember, it's not as if the divorcing process causes someone to snap. Instead, what is being seen is the negative side of a person which has always been there but suppressed and now showing itself.

Preparing For Your Spouse's Initial Reaction

The best way to cope with your spouse who is losing it upon finding out that you want to end the relationships is not to argue and just listen. Sometimes, you will just need to leave things be and take a time out to leave the home. Recognize that this may come as a big shock even if you have both expressed openly how unhappy you've been in the marriage. It's one thing to complain and it's another thing to actually take action and end it.

If you find yourself needing to take a time out, reassure your spouse that you will return. If on the other hand, your spouse becomes openly hostile and combative, do not be surprised to come home to find the locks changed and your belongings thrown into garbage bags and set out on the front lawn or to find the house completely empty. This is the time your contingency plan should kick in. By that I mean, you should have the ability to clear out all of your personal effects before you get locked out.

Anything can happen while your spouse is going nuts on you over this. You need to anticipate the possibilities and plan accordingly. Again, if you have any idea at all that your spouse could go off the deep end, you need to do your homework ahead of time.

Ugly Things That Can Happen

People have a knack of saying and doing ugly things to each other when they are upset. Remember the movie, "The War of the Roses", a black comedy satire about an upwardly mobile divorcing couple. At first glance, it appeared so absurd that it was funny. However, in its humor, there was considerable truth.

The movie depicts a couple who for all intents and purpose had everything going for them. Outwardly, they appeared to represent success, fulfillment and togetherness. They had good careers, a nice home and great children.

The couple in the movie started out as many other couples do - two people who are decent human beings, hard working and devoted to their children. However, their relationship fails and things started to unravel, and then things turn ugly and stressful. The movie shows how the couple's conflict can take on a life of its own. It leads them to do some really crazy and bizarre things. Some of the things are really far fetched, like killing the family dog and serving it as an appetizer. But then there were other things that the couple did that were not so far fetched although still on the strange and bizarre side of things.

I recall one particular case when a husband became so upset over what he thought his soon to be ex wife was up to that he went through her trash with the hope of finding receipts and discarded mail. Who in their right mind thinks to do that? Very angry and hurt people do. In this situation, the husband went to all sorts of lengths to get something on her. Ask any private investigator and he or she will tell you that a good portion of their surveillance work has to do with divorce cases. Other angry spouses will destroy property, spread ugly rumors about the other spouse or try to get them fired from their jobs.

These are just a few examples of the nasty things people going through divorce are capable of. What prompts this behavior? It's hard to say, perhaps it's the rejection, fear of loss or just plain nastiness.

Dealing With an Unreasonable Spouse

In some cases the best way to deal with an unreasonable spouse is not to deal with him or her. No amount of discussion, debate or arguing will change the mind and attitude of a person who is bent on thinking and acting unreasonably. If your spouse truly believes you are a "jerk", then there is no amount of energy you can spend that will change that perception.

Use your energies wisely. Do not waste them on someone who is completely unreceptive to logic and reason. Remember, those who are close to you, know who you are and will view your spouse's lack of reason to be just as it is unreasonable. Unless your spouse's unreasonableness is interfering with your relationship with your children, your personal relationships or your career then let it go. On the other hand, if your children, your personal relationships and your career are affected, then do pursue ways of dealing with it.

These are extreme examples of how men handle divorce, but it certainly helps to be aware of what may happen when you ask for a divorce. If you're ready to take the next step, these articles can help you prepare for the various aspects of getting a divorce: