There’s nothing more sentimental than bearing witness to a happy couple exchanging their wedding vows. Tears of joy during the ceremony is not an uncommon experience. The energy of love and romance can quickly fill the air when vows of promises and commitment to stay legally bonded as partners “from this day forward” are expressed.

Intentions and promises, however, are not enough of a guarantee that a marriage will survive the complexities that spousal cohabitation, personality differences, child rearing perspectives, financial issues and a host of other variables too numerous to mention can present to couples hoping for the “happily ever after” ending.

When a Marital Breakdown Occurs

Unresolved sustained conflicts and disagreements that stack up over time can become magnified and toxic, infecting the spousal relationship which can fuel a downward spiral leading to a marital breakdown process. If this happens, effective communication, trust and respect can be lost. 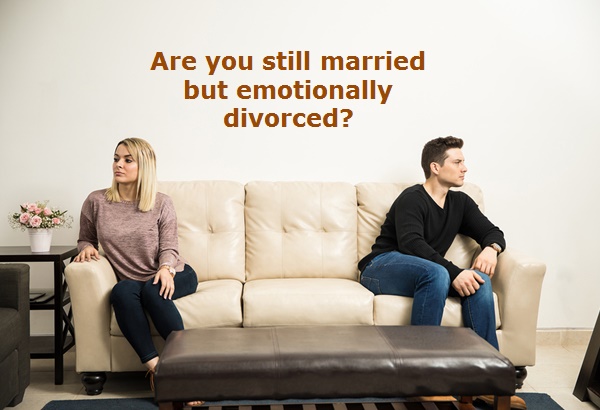 There is no predictable timeline for how long a marriage can remain in this breakdown crisis, but many couples eventually arrive at a crossroad where they feel pressured to choose a path of resolution or disengagement. If the option of separation is chosen, one or both parties has given up trying to work on the relationship and have resigned themselves to the fact that the marriage is over.

Marital separation is either legal, which involves the court system, housing and financial changes, and custody arrangements if children are involved... OR

There is a separation phenomenon called emotional divorce; a purgatory or resting place where one or both partners have suspended most interactions that involve any discussion of marital resolution, expectations or core topics of disagreements.

For some couples, emotional divorce within the framework of their marriage can look like a combination of either of the following avoidance/distraction techniques:

Graveyard Living - A “business as usual - status quo “existence in which the focus of communication is more about household necessities and the management of children or other routine obligations. An agreement or truce to no longer disagree about marital difficulties that then becomes the “new normal” and an acceptable new “spousal” relationship. In addition, this “no more arguing rule” can include an unwritten agreement to not share dreams, insights, hurts, etc.; personal feelings and goals are guarded, secretive and withheld. Emotional support is sought outside of the marriage. This arrangement of emotional disconnect may or may not be discussed openly with no agreed upon deadline. Marriages can float in this existence for many years.

Battleground Stance - Defensive hostile behavior can become the norm which serves as a powerful wall that keeps marital partners at such a distance that any intimate communication about the status of their marriage or relationship is unavailable.

In either scenario, partners may lead separate lives apart from their spouses outside of the home. Some may regularly attend activities and spend time with friends that excludes their marital partners.

Why would anyone emotionally divorce their partner?

So why would one (or both partners) want to accept to disconnect from their “couplehood” and continue to share a home under these conditions? Why would they want to be in a marriage that feels like a graveyard or a battleground? Basically pretending to be married to the outside world but really living a single life internally or even externally.

Married but Single = Mar-ringle (term coined by this author)

After years of discussing the reasoning behind sustained emotional divorce with clients and acquaintances, it seems that the benefits of being a Mar-ringle are common and straightforward:

The dangers of emotional divorce

While for some marital couples living in an undefined timeless state of emotional divorce may serve a purpose, the dangers of this arrangement can be precarious at best:

People who find themselves living in this situation of being married but behaving more like a “single partner” are among many couples in today’s world who choose this option for a multitude of reasons. Due to the fact that most couples living as “Mar-ringles” are not forthcoming with the truth of this arrangement either publicly or even personally, getting an accurate representation of the scope of this phenomenon is challenging.

While concerns regarding finances and children are among the biggest reasons why couples stay together in an unfulfilling marriage, prolonged periods of this cohabitation can be toxic to one’s self-worth and self-respect. The best advice is to seek either formal or informal counsel, such as traditional therapy or support from familiar sources like friends and family, working towards introspection and reflection that will either lead to reconciliation or a decision to terminate the marriage legally.

While on every wedding day the happy couple usually include a “happily ever after” intention, it is difficult to predict whether their relationship will thrive or just limp along over time. What is clear, however, is that relationships that stay stagnant for too long do not have the opportunity to grow or flourish, blocking one’s essential spiritual, psychological, and emotional development.

Brunnie Maldonado Getchell is a Master's Level Counselor, Advanced Certified Hypnotherapist and Holistic Coach who has practiced for more than 20 years in a wide variety of clinical and wellness settings. She is also the author of “Finding Happiness Even Without a Happy Childhood” which is available on her site.