Most women who have ended their marriage have dealt with some form of divorce guilt or shame. They may think they didn’t try hard enough to make the marriage work or wonder if they made the right decision to get a divorce in the first place. Maybe they worry that being a divorcee has demoted their stance with their family or in certain social circles.

But all this second-guessing and self-blame won’t help you heal or move forward with your life. If you are struggling with lingering guilt and shame from your divorce, keep reading for ways to overcome these emotions so you can start embracing the good things in your life.

Guilt and Shame in Divorce

When we think of the word “divorce” immediately we have an opinion, or at least I had one, prior to getting a divorce that is. The truth is, well the truth is sad actually; we tend to feel sorry for “those people,” especially sorry for the women.

Even though the divorce rate has declined since 1980, the lifelong probability of a marriage ending in divorce is roughly 39%. In a survey of over 2,000 heterosexual couples it was discovered that women initiate nearly 70% of all divorces.

So, with the majority of divorces initiated by women, why aren’t we celebrating our new found freedom and feeling proud, instead of feeling judged by others and most likely ourselves. Why, instead of pride, do many of us tend to feel shame, as if we’re broken beyond repair, and how do we change that narrative?

Where the divorce guilt comes from

In order to change anything, it’s important to recognize, talk about, and explore why it’s there in the first place. Talking about the shame is the first step in ridding ourselves of the dark cloak that covers it up and makes it worse.

One of the breeding grounds for judgement is within society itself. Society is “pro-relationship” and certainly not “pro-divorce.” When you’re single, every married friend wants to “couple you up,” at least when you’re a woman. And when you’re married, your vows reinforce the belief that that union is until death do you part.

Society doesn’t like divorce, it represents being broken, and it’s hard to not take that personally.

Divorce is perceived as a failed marriage, when in truth, at least according to comedian Lewis Black, “No good marriage ends in divorce.” And who says every relationship is meant to last forever? Well, apparently those vows do, and when they’re broken, we can feel like we failed, didn’t try enough, weren’t good enough, and those feelings, thoughts, beliefs, can be devastating. 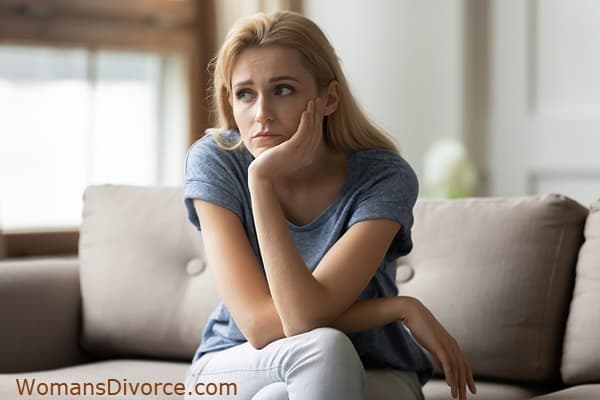 We’re just not good enough, should’ve recognize the problems sooner, stayed too long, or shouldn’t have married the wrong person.  All of those messages, each one contradicting the other, and lacking any foundation in reality, still add fuel to the fire of divorce guilt and shame.

Whether someone points a finger at you, or whether it’s the voice of your own inner critic, the judgement can be thick, and the guilt based on perceived wrong choices can be relentless.

How to move past the guilt and shame

So how can we stop, rid ourselves of the guilt and shame that often accompanies the stigma of divorce, and not allow those damaging feelings to take up more space than they deserve?

As women we often take on much more responsibility than we should, in everything. That burden, especially when mistakes are made, can be daunting. But it’s important to remember that if you take the blame, then you should also take the credit.

I don’t think I’m alone in admitting that taking the credit isn’t something I’m great at, but taking the blame, well I tend to nail that one more easily. But neither the blame, nor the credit, is owned by us. A marriage involves two people, two responsible adults who make choices, and we’re all responsible for our own choices. The burden of someone else’s choices isn’t designed for us to bear. It’s important to let go of the responsibilities of others.

Take care of yourself and treat yourself like you have value, because you do. Treat yourself as well as you treat others, with kindness, patience and understanding. When you fall, when you make mistakes, pick yourself up, dust yourself off, give yourself a hug, and love yourself unconditionally. Remind yourself that mistakes are a necessary part of growth, and the love you have for yourself is not conditional based on being perfect. In fact, we don’t really like those “perfect” people anyway, they’re so irritating.

Talk to someone, anyone. A friend, a family member, or a professional, anyone. Talk about your feelings with someone safe who won’t judge you and someone who will listen. Someone you trust with your feelings.

And most importantly, give yourself time to heal. Healing takes time and patience, and feelings are just that, feelings. Just because you “feel” something doesn’t mean it’s reality, and it also means that it will pass. Even the good feelings go away eventually, unfortunately.

Remember the choices you made, and still make, all of them, are neither bad nor good, they’re just choices and we all make them. The outcome may not be something we like, but that doesn’t mean we made the wrong choice. Our decisions don’t define who we are. Try to be your best ally, you need you on your side.

Dr. Michelle Moore is a licensed clinical psychologist with more than 20 years of experience helping individuals and couples navigate their relationships and often the impending end of those relationships. As a clinician, Michelle has helped many clients overcome obstacles, while also learning about themselves as individuals, and has worked with many couples who are either wanting premarital counseling or who are currently experiencing conflict in their present relationship and are in need of help. She has spent over 15 years researching and presenting on such topics as self-esteem, shame and resilience, finding one's voice, and conflict resolution.

Through personal experiences in her own divorce Michelle has learned more about herself than ever before, often learning the hard way. She's a single mom now, spending her time experiencing life with an amazing 14-year-old son, two rather feisty cats, and a brand new puppy, with a very patient partner by her side.  She writes professionally and for pleasure, sharing her story with the hope that her experiences will help others find support and humor on their journey through divorce into singlehood. To learn more about Michelle, visit michellemoorephd.com or listen to her podcast "forbetternotworsepodcast" on Spotify or Google Podcasts.

Divorce and Guilt - Tips from the life coach

Divorce Doesn't Mean You're a Failure

The 5 Stages of Divorce

How to Take Back Your Life after Divorce