The Story of a Cheap Divorce
(A Cautionary Tale)

The old saying "You get what you pay for" often applies to cheap divorce alternatives. While most people think they'll avoid high legal fees and save time by using a paralegal or other service to complete their divorce, they often face unexpected complications along the way. The story below illustrates why sometimes it's better to hire a professional in the first place.

Did you ever imagine getting a divorce was more difficult than the marriage that got you there? Well, it happened to me. 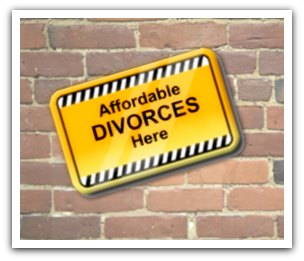 After a decade of darkness with the wife of the new millennium, the two of us agreed that our lives were worth saving and in order to continue to exist we needed to get away from each other. Agreeing that it made no sense to pay expensive attorneys, we settled our own affairs and decided to take the cheap way out...a paralegal service that would file the divorce papers for a fee and we would be finished.

Slam dunk baby! My marriage wasn't going into overtime… I was ending the game. Swish!

Being the smart sophisticated writer that I am, I spied a paralegal service on the boulevard as I listened to an oldies station on the radio. It was going to be easy, fast, and cheap. As if the heavens opened up, the light shown down on this little storefront that I will forever call… Sleazy Legal. God was taking me to the Promised Land; the avenue from hell leading to heaven and Sleazy Legal was like the gates of St. Peter opening up for me. Fantastic! I was ready to start my life over and these people were going to make my divorce easy. Sleazy Legal. Yeah!

I remember my father telling me as he sat watching three TV's at the same time. "Ya get what ya pay for…don't buy cheap booze, don't date cheap women, don't buy cheap condoms and don't cheap out."

Ah ha! Now in my fifties, but still in my adolescent rebellious phase, I decided to do it my way, and not take my father's advice. I was going get this divorce over fast and cheap. I had visions of going up to the club and seeing my friends who were all in messy expensive divorces and telling them, "My divorce cost a few hundred dollars, and it was done in the blink of an eye. HA HA to you."

Sitting at the desk at Sleazy Legal was a pretty woman in her mid forties who told me how simple this was going to be. Sign the papers, pay us, pay a filing fee to the court and voilà. My now ex-wife, as eager as I was to put the hellish escapades of marital futility behind us willingly signed the papers and I paid the fees and the two of us waited and waited. Godot was coming faster than this divorce.

As I inquired from time to time as to what was taking so long, the pleasant woman at the desk told me about her own divorce, the problems she had with men, her various escapades and her hopes for the future. I couldn't help thinking that she was thinking I was the man of her future. Dream on wing-nut, I was still licking my wounds, with a 1,000 yard stare in my eyes, battle weary and beaten down. Women were not in my future.

My daughter asked me why I wasn't dating and told me even though I was old I was still good looking enough to find someone. I asked her this question. "Nikki, if you went shopping for bananas would you buy a yellow banana or a brown banana?' She looked at me and asked, "Do you think I'm stupid? I would buy a yellow banana." I said, "Exactly, because when I go to the relationship store I always get the brown bananas. I'm not going to the relationship store anymore."

As time dripped on, I continued to have periodic conversations with the looking for love, middle-aged woman with her own problems at Sleazy Legal. The conversations went like this:

Then suddenly she disappeared and the Owner took over. The Owner was a hell of a good actress, the very best. As a director I have worked with some of the greatest including Jessica Lange, Teri Garr, Sally Kellerman and this gal topped them all. She made me think she knew what she was doing. She would handle my case personally. WOW! The owner of Sleazy Legal was going to finally make this easy. YIPPIE!!! She was going to get to the bottom of this.

What would follow was a series of cover-ups and lies that would dwarf those executed by such American icons as Dick Nixon. This might turn into a reality series. I might not get my divorce, but man these were some weirdos and as a writer I tried to convince myself that this was great material. However, I wanted my F***ING DIVORCE!

Sleazy Legal had screwed the pooch and I was the pooch. Ouch! However, a great character was emerging in the owner of Sleazy Legal. She was the type of person that I could use over and over again in screenplays and telefilms. She broke the mold. I was happy, as it is hard to create characters like this. No, I wasn't happy! I WANTED MY F***ING DIVORCE!

One night when I was particularly exasperated, I sent an email to the owner of Sleazy Legal stating my displeasure and wanting a resolution. What came back was an email that was so riddled with spelling and grammatical mistakes that Miss Merit my seventh grade English teacher would have dropped dead. And so, I just couldn't help myself and decided to correct her email in red, highlighting her spelling and grammatical mistakes. I sent back the corrected version along with these questions:

After this exchange, the owner of Sleazy Legal returned all my paper work after the court sent it back for the second time because of mistakes by Sleazy Legal.

Feeling sorry for myself after waiting over a year for a divorce, I hired a high priced family lawyer who looked at the paperwork and saw the errors, fixed it, filed it and voilà, our divorce was final six months later. Nearly two years to get this done.

As I sat staring at the divorce papers, I thought back to my father. When he told me not to date cheap women, drink cheap booze, etc., I wish he had admonished me never to hire cheap legal. You do get what you pay for.

Oh, and by the way. I went back to the relationship store and found a perfect yellow banana.

Rocky Lang, is the author of eight books including "If You Thought Your Divorce Was Bad...Wait Until You Read This Book!", "Growing Up Hollywood - Tales From the Son of a Hollywood Mogul" and "Confessions of Emergency Room Doctors." He is also a producer of major motion pictures and Telefilms. He lives in Los Angeles. Twitter @rockylang or rockylang.com

And if you're drawn by the flashy signs and ads promising a hassle-free cheap divorce, please proceed with caution. I know you don't have money to throw away, but don't skimp on something that has the potential to affect the rest of your life. Sometimes it really is best to hire a lawyer to get the job done right the first time.