Should you keep a record of those angry cell phone voice messages from your ex? It’s worth considering if you are fighting for custody. For example, a famous actor embroiled in a bitter custody dispute left an angry voicemail berating his daughter and ex. It went viral and the actor was temporarily barred from seeing his daughter after the judge in the case listened to it.

While most voicemails won’t make the news, it does illustrate how advances in technology can introduce evidence into child custody battles. In some situations, this evidence can point out character flaws that aren't always obvious to the courts. 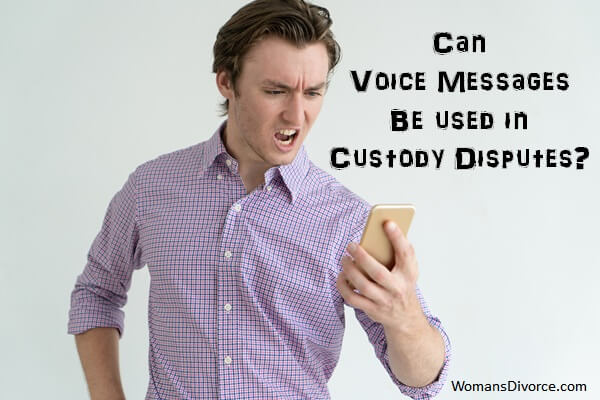 The following information about copying cell phone voice messages and answering machine recordings can come in handy if you are gathering evidence for a custody case.

Voicemail Messages May Influence Court Custody Decisions... Will You Be Ready?

If you've ever considered recording your phone conversations, you know that it is illegal unless you get the other person's permission. Ironically, if you are trying to capture angry, hysterical, threatening or scary conversations from someone, this would defeat the purpose, because they most likely would never agree to be recorded! And even if you did make a recording, because it is illegal, it would not be admissible in court! (There are exceptions, so please see the footnotes at the bottom of this article).

But, if this type of person leaves a message on your answering machine or on your voicemail, it is understood that they are being recorded. Therefore, it is more likely that this would be allowed in a court situation to support your divorce or custody case. Each situation and jurisdiction is different regarding these matters, so we cannot say that in every case, the voicemails would be allowed in court, but we can say that it is more likely than secretly recording a phone conversation.

If you have cell phone voice messages that you think would help you in court, you probably have been saving them every few days. If you didn't, you know that your service will erase them permanently after 30 days. The problem is that eventually, you have saved so many messages that there is no room for more messages. This frustrates everyone and makes the angry caller suspicious.

So, that leaves us with the question of "how do I get these voicemail messages onto a CD?"

There are four options:

OPTION 1 - VoIP Service + Phone Recording Software. This is where you have your computer call your voicemail and you record the message directly into your computer.

OPTION 2 - Cable Connection + Phone Recording Software. This is where you hook up cables between your phone and your computer and you record the message directly into your computer.

OPTION 3 - Receive Voicemail as Email Attachment. This is where you sign up for a third party service that has a feature that can literally grab your voicemail and send it to you as an mp3 in an email attachment.

OPTION 4 - Voicemail Transfer Service where you hire someone to do it for you.

Copyright 2007 Howard Richman. Howard Richman is a pianist, composer, teacher and author. His passion is finding unconventional solutions to common problems. For more details on these options you can go to VoiceMail Saver.

I recently received an email at WomansDivorce from one of our readers that offers another method for recording those cell phone voice messages. Thanks for the tip Em!

I work for AT&T on the cellular side, and have certainly run across the problem with saving cell phone voice messages before. The easiest and most cost effective way for most single moms who don't have a lot of money to spend on third party applications and may not have the patience to figure it all out is to go out and buy a $10 tape recorder at the store.

They can put their phone on speaker, call their voicemail, and hit record when their messages start playing. It's fast, it's simple, and while it may not get it to CD, it's a heckuva lot better than possibly losing the message in the digital void.

If you want to include an advanced bit here, you can just use the headphone jack to plug into the line in on the back of the computer, and use the standard Sound Recorder to get it transferred to a .wav file, which can then be transferred to a jump drive or a CD. I work tech support, and I can tell you that I've had women crying when I walk them through this. They had no clue it could be done so easily. Please pass this option along!

A Practical Guide to Taping Phone Calls and In-Person Conversations in the 50 States and D.C.