While the divorce rate for younger couples has started to decline, the rate of late life divorce is on the rise. Whether known as “grey” divorce or “silver” divorce, more and more older couples are un-tying the knot they tied decades ago. Initially, the term “grey divorce” referred only to men and women who divorced after being married for 40 years or more, but today, grey divorce can describe anyone over the age of 50 who finds themselves suddenly single. The Pew Research Center reported in 2017 that the divorce rate for those over the age of 50 has doubled since the 1990’s. Further, for those 65 and older, the divorce rate tripled from 1990 to 2015. 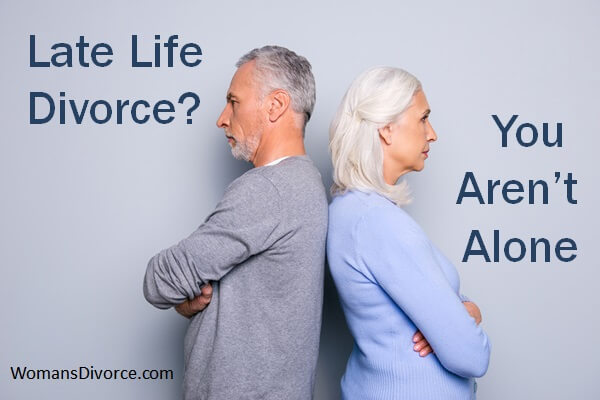 While there are many reasons for a late life divorce, overall, those who go through such a divorce do so because they do not want to enter the last chapter of their life in an unhappy union. Divorce can be both easier—and harder—for those who are older, however there are many unique challenges to divorcing later in life. There are seldom custody or child support issues because the children are grown and gone, however money issues can be an even bigger consideration than among those who divorce in their 30’s or 40’s.

One thing is for sure—sixty or seventy is just not “old” anymore, so those who are considering a late life divorce have time left to do the things that make them happy. One woman who was blindsided by her husband’s request for a divorce when she was 62, says she ultimately found the divorce “liberating,” once she realized her life was finite. Others who divorce later in life say they regret not making the move sooner, when they were younger and had more time to “get their bearings.”

Divorce in your 60’s or 70’s can truly be a frightening experience, particularly in the financial realm, and while there may not be child custody issues, that does not mean the grown children do not get involved, even taking one side or the other.  There are many different considerations for seniors contemplating a divorce, namely financial stability, and the possibility of finding companionship at this late stage in life.

There are many reasons for divorce, and every divorce is unique, however the following are the most common factors in senior divorces:

Issues to Consider if You are Contemplating a Late Life Divorce

While some of the issues between a late life divorce as opposed to a divorce in your 20’s, 30’s or 40’s are the same, others are very different, and warrant extra attention. These issues include:

On the plus side, a late life divorce may significantly increase the happiness level for many. As our lifespans increase, we are more likely to choose to live fully for the remainder of our lives, finally doing all the things we may have wanted to do for many years. Unfortunately, grey divorcees do tend to be less financially secure—particularly women—and for older men, living alone can decrease the level of overall satisfaction with their lives.

Those who choose to remarry may also have to face the statistics which say remarriages are even less stable than first marriages. Perhaps the best statistic to remember if you are facing a grey divorce comes from an AARP survey which found that 76 percent of people divorcing later in life felt they made the right choice. So—even though getting divorced after years of marriage can be challenging, it can also be a golden opportunity for a fresh start.