The actual divorce process is controlled by the participants. Many people do not realize that not all divorces end in contested courtroom proceeding. 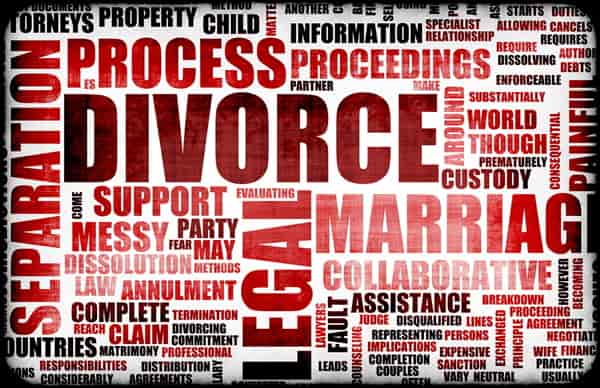 Generally, once you have embarked on a contested divorce, the types of proceedings from State to State are similar, but not identical. You should consult with a lawyer in your State about the specific process.

The length of your case may depend on the state and county that your case is filed in. It often depends on how crowded the court docket may be and often may take a year or more. Below are the following stages of a divorce process:

JURISDICTION
Before a divorce is filed you must determine where the matter will be heard. Different states have different rules for bestowing jurisdiction. In many states, a party must have lived in that state for 180 days prior to filing. If there are two possible jurisdictions, it may benefit the party filing the Divorce documents first to choose the jurisdiction in their state. That is the primary benefit of serving and filing first. There is little benefit to serving and filing first other than to prepare in advance and to choose the jurisdiction.

SUMMONS & PETITION
The divorce process is usually commenced by serving on the other party a Summons and Petition for Divorce or Legal Separation. In some states, a divorce is also called a Dissolution of Marriage. The only significant difference between a divorce and a legal separation is that in a legal separation, the marriage is not dissolved. All other issues related to custody, parenting time, child support and property may be resolved just like a divorce.

Service in most states must be complete by actually serving the petition on other party personally (or a person who resides in their home who is considered to be of suitable age and maturity). In most states, a party may not serve their own divorce papers.

The Summons is a general document announcing that a divorce or legal separation action is being commenced. In some states, that document also indicates from that point forward neither party may dispose of marital assets, change insurance coverage or modify any other significant holdings except for the necessities of life.

The Petition has two parts. The first part is a statement which sets out basic facts such as the identities of the parties, whether they have children and what assets they may hold. The second part of the Petition seeks relief, such as an award of custody, spousal maintenance, or child support and a division of assets and debts. The Petition is often tailored to seek the maximum relief. It is a positioning paper that will often seek as much relief as the proponent could possibly seek.

ANSWER AND COUNTER PETITION
The opposing party usually has thirty (30) days in most states to submit an answer to the petition. The Answer is very simply the opposing party's statement of facts and their request for relief. Often the service of an Answer is waived. This is often done to save the parties the cost of an additional filing fee should the matter be settled. However, if a waiver or extension is not granted by the opposing party and an answer is not filed within thirty (30) Days, the original party may seek a default. A default means that the original petitioner may request the relief requested in their petition without opposition. Late answers are often accepted since Courts prefer determining cases on their merits rather than by default.

TEMPORARY HEARINGS
A temporary hearing may also be called a Pendente Lite Hearing. Such hearings may be scheduled by either party by filing a Motion supported by an affidavit. Temporary/Pendente Lite hearings are designed to resolve issues while the divorce is pending such as which spouse will have:

Courts generally have a great deal of latitude in resolving these temporary issues. In most states, temporary hearings should not affect the final outcome. However, from a practical perspective, temporary hearings can be very important since Courts often favor a policy of maintaining the status quo.

Temporary orders may be changed if there is a substantial change in circumstance while the divorce is pending. Issues that often arise may be that the debt on an asset (such as a mortgage) is not being paid, requiring immediate actions such as a change in occupancy of the homestead or a sale of an asset before the divorce is final.

MEDIATION
Many courts require the parties to attempt to mediate their disputes before the matter is submitted to the Court. One exception to this rule may be where domestic abuse has occurred. Mediation may occur between the parties with attorneys present.

Mediation means that the parties visit with a qualified neutral who will attempt to get them to resolve their differences. In mediation, the neutral is not an advocate and will not provide legal advice.

Most discussions that occur in mediation are not admissible in Court under the public policy consideration that favors a free exchange of information between the parties to help them resolve their differences.

CO-PARENTING CLASSES
Many states have adopted a policy that requires parents to attend co-parenting classes where children are involved. The goal is to teach parents how to minimize the impact on children involved in a divorce. In most cases, the parents need not attend together.

Some states also require that children of a certain age attend a class to teach them the skills to deal with divorcing parents. This is not embraced in all states and is primarily found in Northern states.

ADVANCE CASE REVIEW
Many states have a hearing that is called an advance case review or early case resolution meeting or Case Management Conference. In such a hearing, the parties meet with the Judge assigned to the case or a referee to discuss the issues, or what discovery may be necessary. This is the parties' first chance to resolve the case or portion of the case.

DISCOVERY
Discovery refers to the "investigation" phase of the divorce process. It is primarily dedicated to identifying the contested issues, a determination of assets, income, and debt of the parties. This exchange of information can be conducted informally with both parties agreeing to freely exchange the information. It may also be conducted formally through the submission of formal documents that require answers under oath.

FAILURE TO PROVIDE DISCOVERY
The penalties related to a failure to respond to discovery or to appear at a deposition may be severe. The opposing party may file a Motion to Compel discovery and/or seek sanctions related to that failure. Severe sanctions may include establishing facts related to a case. That means that the Court disallows an opposing party from presenting an evidence or testimony at trial to contest an issue where discovery was not provided. Default is the most severe sanction where the Court allows a party to proceed as if the entire case or any individual issue is uncontested. The Court may also award attorney’s fees to the party that submitted the unanswered discovery.

If you require additional time to respond to discovery, you should request the same in writing including a specific timeline when it can be completed.

EXPERTS
Experts are often employed to determine certain facts. Those experts may be jointly agreed upon by the parties, which can save on the cost of having individual experts testify at trial. However, where that is not possible, each side may hire an expert to contest an issue and require their testimony at trial.

SETTLEMENT
A divorce or legal separation case may be resolved at any time the parties come to an agreement on the issues. In such cases, the parties would sign a Marital Settlement Agreement or some other form of stipulation resolving their issues. This can occur right up to the point of trial.

SETTLEMENT CONFERENCE/PRETRIAL
Settlement or pretrial conferences are schedule by the Court. In such conferences, the Court may require each party to submit a pretrial statement of the case and issues. In such hearings, the Judge will meet with the lawyers and/or parties to discuss the issues and to make settlement recommendations. This is a gentle form of arm twisting to:

1. Try to resolve outstanding issues; or

2. Set issues that will be contested at trial and may include timelines for exchanging information, exhibits and witness lists.

TRIAL
If you are unable to settle your case with your spouse, it will go to trial. Some states have a trial by jury. Other states have a trial to Judge. At trial you each tell your story to the judge. It is told through your testimony, the testimony of other witnesses, and documents called exhibits. At trial, the moving party (usually called the petitioner or plaintiff) presents their case first. They call their witnesses who are subject to cross-examination by the opposing party. When the plaintiff or petitioner rests their case, the Respondent or Defendant presents their own case with witnesses and evidence, each subject to cross examination by the opposing party. (Get tips for testifying in court)

Appeals
After a divorce, either party has a right to an appeal if they disagree with the Judge’s ruling. The timelines for an appeal are severely limited. As a result, you should consult with a lawyer in your state regarding those timelines.

Modification
Whether the issues in your divorce are settled by you and your spouse, or are decided by a judge, some things in your judgment can be modified (changed) by a judge after a hearing. Usually, child support, alimony, child custody, and child visitation can be modified, but only if one of you can show that there has been a change in circumstances.

Enforcement
If you or your spouse disobeys an order that the court makes in your divorce judgment, you may file a Motion to Compel Compliance. Such motions are generally for contempt and require the service of an Order to Show Cause and a Motion.