Divorce and the Bible: Is that an Oxymoron?

It is said that marriages are made in heaven. In the real world, however, you need an official license for the marriage to be legal. But how can you ever know that the legalized marriage is the one that was made in heaven, with God’s acceptance?

This is a question that Amanda Nicole, author of From Divorce to Destiny, poses to her readers, who may believe that it is against the Holy Bible to file for a divorce. How can a person spend the rest of their life working towards a marriage that was never blessed by God in the first place?

Are Dysfunctional Marriages Blessed by God?

Most Christians feel that marriage is forever. But for many of them, they fight day in and day out, struggling to keep their marriage alive. When they can’t, they continue to live in dysfunctional, failing marriages for fear that they will fail their faith if they divorce. Amanda Nicole, through her book From Divorce to Destiny (#ad), urges her readers to stop doing that.

Going through a difficult marriage herself, Nicole decided to take the plunge and get out of a dysfunctional marriage that was harming everyone involved. She understands the fact that it can be increasingly difficult to lead a respectable life with people’s judgmental views haunting you for the rest of your existence.

However, she strongly argues that a marriage is not legalized in God’s eyes unless it’s officiated and blessed by Him. Nicole states, “I’m not pro-divorce; I’m pro-arranged marriage, with the arranger being God. Any marriage that He joins together is worth fighting for, and that vow should never be broken. But unfortunately, fewer marriages meet those standards than people tend to believe.

It’s not worth fighting for something when God doesn’t fight with you. I realized that that is what I was doing in my marriage and decided that I’d rather find out what my life looked like with the spouse that God chose because I’d already seen what it looked like with the one that I chose, and it wasn’t good.” She wants people to move toward God’s complete will for their lives, their marriages, and their children. “Sometimes that means staying and fighting, but it’s not impossible that sometimes it means divorce and moving away from our will for our lives and towards God’s will for us.” 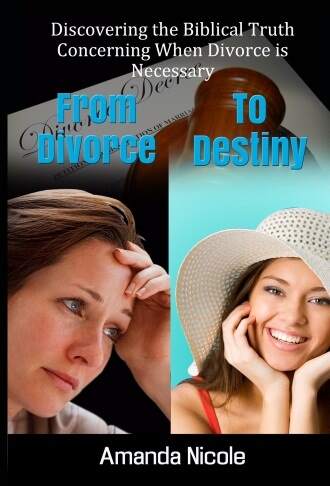 The research that Amanda did for the book was initially for herself, to help her see through the fog of mental turmoil that she was facing towards the end of her marriage. Although she referred to articles, videos, scriptures, and the like to get access to more knowledge on the subject, her main resource was the strength she received from prayer.

Throughout the book, Amanda Nicole reinforces the fact that she in no way promotes divorce as the best solution to end a marriage. The main message that she wishes to share through her book is that the reader should seek God for themselves to see if their choice of mate was their choice or God’s and if their marriage reflects the relationship of Christ and His Bride.

God’s will for us will make us happy, give us joy and fulfillment, and make our life worth it. From Divorce to Destiny is designed to help the reader move toward God’s will. (As an Amazon Associate I earn from qualifying purchases)

Further discussions about divorce and the bible issues can be found in the following articles:

Conditions of the Marriage Covenant